You are here: Home / Visitors and Tourism

If you’re looking for a unique vacation that’s exhilarating, magical, and filled with beauty, history, and southern charm, come visit our hidden treasure – Southport, North Carolina. Where the river meets the sea.

Once in town, it won’t take long to see why we’re called historic Southport. Visiting the Fort Johnston-Southport Museum & Visitors’ Center, NC Maritime Museum, Old Brunswick County Jail, and the Old Smithville Burying Ground are all great ways to get a sense of how far back our community dates. Many consider our town to be a living museum – a place where history is both preserved and enjoyed.

Our community’s combination of natural beauty and historic charm has caught the attention of Hollywood. Many popular movies and TV shows have been filmed in Southport including Crimes of the Heart, Nicholas Sparks’ Safe Haven and Steven King’s Under the Dome.

After a day of strolling our tree-lined streets, shopping in our boutiques, and visiting the many sites that make Southport so special, be sure to stop and spend some time at one of our many local restaurants. From fine dining to fun dining, your choices include fresh- caught seafood, steak, salads, hamburgers, ice cream,pastries, and more.

Finally, when the day is done and it is time to rest, you’ll appreciate our wide range of accommodations from national hotel brands to quaint and cozy bed-and-breakfast inns.

After a day of strolling our tree-lined streets, visit the many sites that make Southport so special.

Find Your Way Around

Once you are in town, it won’t take you long to see why we’re called historic Southport.

So slip on some flip-flops and enjoy a leisurely day around the treasured jewel that is Southport.

The City of Southport Tourism

We are here to assist you! My name is Randy Jones, Director of Tourism for the City of Southport. Our office is upstairs at the Ft. Johnston-Southport Museum and Visitors’ Center, located at 203 E. Bay Street overlooking the mouth of the Cape Fear.

Our Visitors’ Center Volunteers and I encourage the public to visit anytime.

For your convenience, free Wi-Fi service is offered in downtown Southport.

Meet the City of Southport, a historic city with a revered past, a vibrant present and an exciting future. Historic Southport brims with an atmosphere and charm fostered by residents who have cherished and preserved its past. Their love of history is embodied in the beautifully restored homes, churches and public buildings that grace the city’s unique, tree-lined streets.  The Fort Johnston-Southport Museum and Visitors’ Center overlooks the mouth of the Cape Fear, showcasing the history, heritage, culture and the natural beauty Southport has to offer.

Our elite team of Southport Ambassadors can provide you with the information you need to make Southport your most enjoyable stop.

Email us to request more information on the City of Southport. 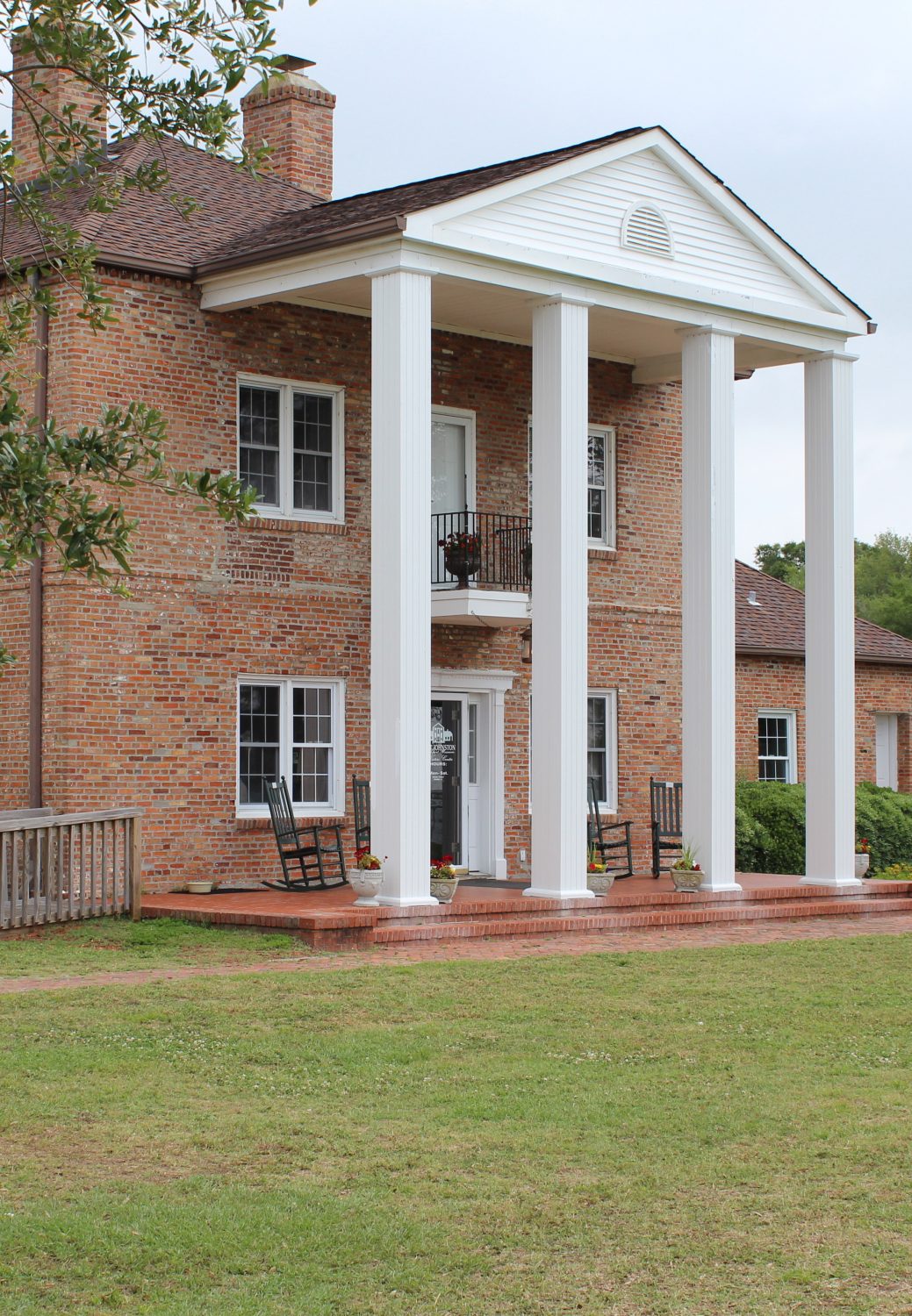 The History of Fort Johnston

Fort Johnston was the first fort constructed in the state of North Carolina and named for Provincial Governor Gabriel Johnston. The Fort was built in 1749 by the British to defend the area from the French and Spanish. The abundant natural resources such as tar, pitch, turpentine, and tobacco put a target on this area. Ironically, when the Spaniards did attack in 1748, the Fort’s construction wasn’t finished and finding no one home, the Spaniards went up river and looted Brunswick Town instead.

There were conflicts to come and Fort Johnston would play at least a small role in almost all of them. In 1754, men from Fort Johnston were sent to help fight in the French and Indian Wars. In 1759, they fought against the Cherokee. When the Revolution broke out in 1775, a large group of patriots stormed the Fort and burned most of the structures in defiance of the British. George Washington and his congress supported rebuilding Fort Johnston and in 1795 enough work had been done to allow Southport’s citizens to use it as a meeting place for their first documented Fourth of July celebration.

In 1810, the Fort saw extensive renovations, including the construction of the present day Garrison House. During the Civil War, Confederates occupied the Fort which was the hub for recruitment and training. The Fort also provided some protection to blockade runners. (Confederate cargo ships that smuggled goods past Union ships which blocked waterways.) During this time, the Fort was occasionally called Fort Branch, and Fort Pender, but Fort Johnston would be the only name that stuck.

When the Civil War ended, so did the life of the Fort as a seacoast defense. Since June of 1881, the Fort’s buildings have been variously used by the US Signal Corps, the Weather Bureau (National Weather Service), the US Army Corps of Engineers and the US Surveying Corps. In the 1950’s officers from an air rescue unit of the US Air Force stayed here. The Fort was transferred to Sunny Point Military Ocean Terminal in 1955.

The federal government transferred the property to the City of Southport in 2006. The Garrison House of the Fort is the only surviving structure and is now home to the Fort Johnston-Southport Museum and Visitors’ Center, and the Southport Historical Society.

Fort Johnston is listed on the National Register of Historic Places.

A running community joke. The four streets run roughly northwest to southeast, although not in exact order. “I Am” is a little obscure, but the other three are named for figures in colonial history. One legend claims a town clerk decided to have a little fun when drawing the street grid back in the 1950s. Others think the combination recalls Southport’s colorful history from Prohibition.

The City of Southport has partnered with the Southport Historical Society to use the free mobile app called PocketSights to provide visitors and residents with directions for self-guided tours of Southport and the Cape Fear Region.  Five tours are currently available.

The first four tours are “Free Roam Tours”, meaning you can either walk and/or drive from location to location in any order you choose.  You will want to drive if you plan to take The Cape Fear River Circle Tour, as the “circle” covers nearly fifty miles and could take sixteen hours to walk!

The free mobile app by PocketSights will guide you from one point of interest to the next using GPS.

Download the mobile app below to take the following self-guided tours on your GPS-enabled mobile device.

Southport has so much to offer for both visitors and residents alike. Following is just a partial list of things to do as noted on Trip Advisor®. 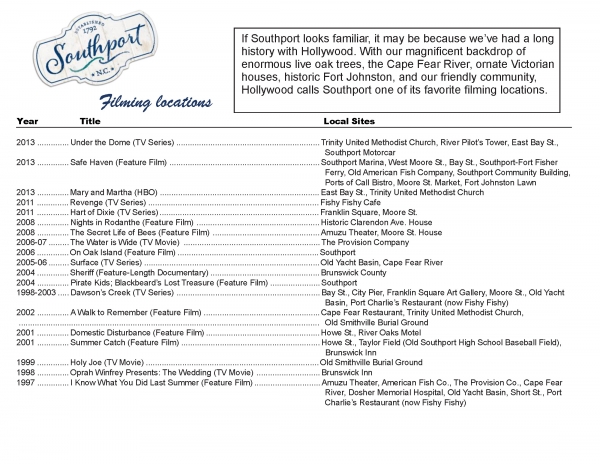 Not finding what you are looking for? Contact us.