You are here: Home1 / eoc updates

Southport is able to recover quickly from difficult conditions.  Today is a beautiful day, compared to yesterday.  The City of Southport is blessed with some amazing professionals.  This will be the last summary of conditions from Hurricane IAN.  Attached is the official damage assessment from our Building Inspector, Kiley Barefoot and Public Services Director, Tom Stanley.  It is rated on the intensity of damage, and the city fared very well from this storm.  Parks & Recreation Director, Heather Hemphill has visited all the Parks and Recreation Facilities and properties and has reported to me minor or no damage, except for the Atlantic Street Park and CAMA access point. It has been CLOSED, by Parks & Recreation Director Heather Hemphill.  The bulkhead has been destroyed, and it is dangerous. The City Pier, City Dock, and Riverwalk have been re-opened. All city streets are open as well. Chief Treadway & Heather still plan to check all our waterfront properties from the waterside on the Fire Boat Monday Morning, to get a closer look.  Chief Coring and his officers have been all over the city checking things as well, he sent an email report out earlier.

The Emergency Operations Center has just closed.  It was open from Thursday at 5pm until today at 12 noon.  We answered approximately 60-75 phone calls during this time.  Most calls into the EOC were weather-related questions, electricity concerns, general questions about safety, and reports of trees or electric lines down.   EOC Communications have been shared by email to each of you during the storm, with the latest weather updates and other pertinent information.  Communications Director Randy Jones and his team have kept the website and social media sites updated regularly with notices from the EOC.  Our fire and EMS crews have answered 34 emergency calls during this event.  It was reported to me from the NC Ferry Terminal that yesterday there was a wind gust of 78 mph.  The wind gusts that we monitored here at headquarters and the wind gauge at the Waterfront were around 54mph.  Then the weather station at the foot of Lord & Bay Street was found offline, due to wind damage.  So, we received no further readings from it.  The tide on Friday around 11:30am was the largest in conjunction with this storm.  Roads were closed, and officers were posted to protect any from driving through the area.  All fire and EMS vehicles and equipment have already been washed and maintained today to rid it of any salt spray.

The last I heard, there are about 25 customers without power.  Brunswick Electric is working diligently to restore these and will likely be done very soon.

This storm was a great reminder of the teamwork that is evident in Southport.  No work-related injuries were reported during this event.  I would like to thank our Mayor and Board of Alderman for all their support throughout this event.  I pray we can make it through the last day of Hurricane Season (November 30) with no other threats. If anyone needs any further information, please contact me by cell at 910-477-2365.

Thank you again for everyone’s help serving Southport and our citizens.

A quick update on electrical service.  Chief Drew spoke with Director of Public Services, Tom Stanley and we currently have 300 customers without electricity in the city. There were more, but some have been restored. He said that Brunswick Electric is working diligently to restore everyone. Brown Street should be coming back up soon and will restore a big number. Please remain patient as City and BEMC crews will be working through the night to get services restored.

Please find our final update on Post-Tropical Storm Ian attached. Gusty winds and heavy rain continue over parts of the area, but we expect improving conditions through the evening. Wind gusts of 40-60mph and an additional half inch to inch of rainfall are possible.

Overall, at first glance there is minimal damage through out the city.  We have responded this afternoon/evening to about 8-10 trees down resulting in power lines/poles being damaged.  Public Services Director Tom Stanley and his crews have been working closely with Brunswick Electric and have done a great job of responding to needs in the city.  Chief Coring and the Police Officers have assisted with road closures, damage assessments, and many other law related calls.  All roads have been cleared and are now open.  There are 3 additional police officers that will be on patrol this evening due to the power outages and will do an additional damage assessment in the morning.  Chief Coring will report any finding on tomorrow.  The fire & EMS crews have answered 24 emergency calls since the State of Emergency was enacted yesterday at 5pm.  The EOC has been manned for over 24 hours now, with a minimal amount of phone calls, most were questions about the storm or power outages, assistance was offered to all our citizens.

I would suggest that the Building Inspector, Kiley Barefoot do a final damage assessment this weekend.  I will line up for the Parks and Recreation Director, Heather Hemphill to get with Chief Treadway on Monday to take the fire boat out to inspect the City Dock, Pier, Riverwalk, Kingsley Park, the Waterfront Park Bulkhead, and other City Waterfront properties from the water.

If anyone has seen specific damages in their neighborhoods that we have not noticed, let me know so I can log it into WEB EOC activity report.  This will ensure that it is reported to the County and State partners.

I appreciate the support from the Mayor and Board Members during this storm.

Thank you for all the hard work and collaboration in response to Hurricane Ian.

From Chief Drew: The Waterfront has been taking a beating for the last hour or so.  A large tree on River Drive has taken out several power poles, and the electricity is down on River Drive and Cape Fear Drive.  The structure fire response with Oak Island has been cleared.  When the storm is clear, we will begin damage assessments.  If you know of damages anywhere, please email [email protected] so we can keep track of damages. Hurricane Ian made landfall in SC at 2:05pm and the forward speed has increased.

Mayor Hatem and Chief Drew participated in the 2pm Conference Call with Brunswick County.  Here are the takeaways:

Our Report to the County:

Tornado Watch in Effect until 10pm.

ROAD CLOSURE: The Yacht Basin loop roads have been closed due to flooding. 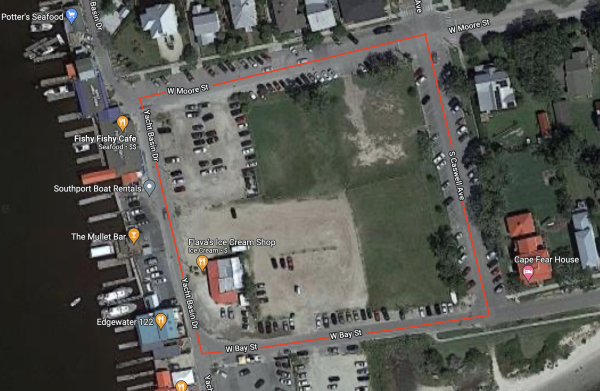 Updated wind swaths came out at 11am from the National Weather Service. Ian is moving North at 14mph, maximum sustained winds are 85 mph with gusts higher.
So far, minor flooding/ponding on some City streets. Two reports of downed tree branches, one on Bay Street and one on Turtlewood Drive. 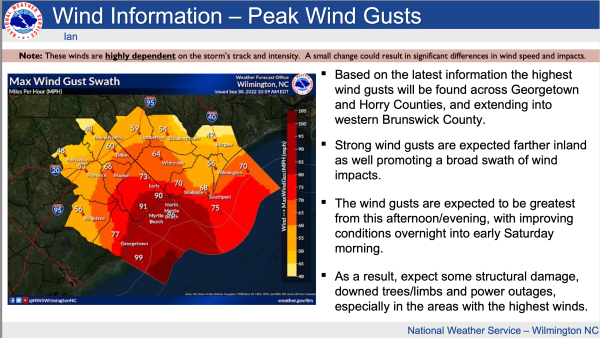 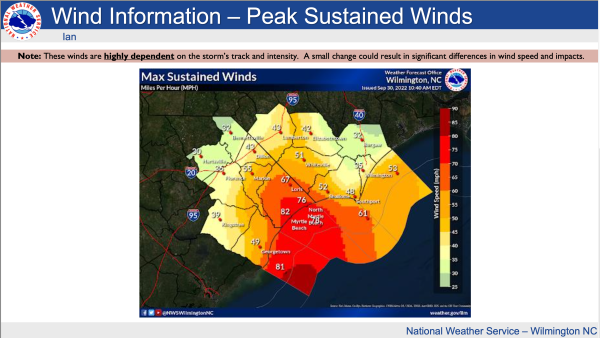 The City of Southport is under a State of Emergency.  The Mayor signed the proclamation at 5pm, September 29, 2022.  The City of Southport has been placed under a HURRICANE WARNING as of 5pm also.  I was contacted earlier by the City Manager, who received notification from Brunswick County that the Storm Surge for our immediate area will increase as much as 6 feet.  As I have further information, I will pass it along to each of you.

The city staff had a conference call with our county partners at 2pm and had an emergency operation meeting afterwards.  Here is a summary of the meeting:

Brunswick County – No State of Emergency, no evacuation orders, no shelters are opening.  They will have an internal EOC operation, and a WEB EOC Event has been created.